Finally a gay voice from the Indian subcontinent

There is a strange thrill in having a chilled beer on a winter night. Descending your throat,
the way it navigates through your body, making its way down, piercing through your chest,
almost, dissecting it… one may think, that thrill is enough to justify the act, let alone any kind
of intoxication. As I embrace another pint, with my somewhat moist palms- tiny droplets of
passion, that appear with every passing rendezvous between me and that little green pint- I get
zoned out for a moment. The thumping music in the background, and the orange hue in the light
all around… I look around for a source of distraction, in fear, that I may already be inebriated…
a state I prefer myself to be in, but not so early. END_OF_DOCUMENT_TOKEN_TO_BE_REPLACED

How many more children have to die?

Jamie Rodemeyer, a boy of fourteen just starting high school in Buffalo, New York has taken his own life because he could no longer bear being harassed for being gay. A lot has been said about and against the bullying that drove him to his death. But I do not blame the bullies. I blame those who encouraged him, directly and indirectly, to “come out” to the other kids in his school. And I blame the great lie that some are gay and some are straight.

But we put our males who love other males in a ghetto, and we give them special names, and special rituals. like “coming out,” which is really nothing more than speaking the truth to a bunch of liars. The boy who admits to feelings of love for other guys is brave and honest. How else can all the others, who are neither brave or honest, react to him except by making a scapegoat out of him for all their unspoken fears and desires. So what person in their right mind would encourage a child to step into this storm of madness and deception and face it alone? It is hard enough for an adult supported by other adults to enter into this endless battle with fixed ideas and unexamined beliefs. But a child??? And we look down on societies that practiced human sacrifice? By what rights?

Thus the Bible, and surely it knows whereof it speaks. It has become cliché for those who write about the love of one male for another to unmask figures from the past. Surprisingly, the work is not finished, for there are those who would still veil what others reveal. The latest tactic in that losing campaign is to assert “But there is no proof!” But this is not a work that hinges on proof but rather on signs. And for those with eyes and with good will, the signs are legion, and are unmistakable. This will be a regular column, in which we will hold up to admiration (or contumely, as the case might be) those of our forefathers who loved wisely, and also those who loved a tad too well. END_OF_DOCUMENT_TOKEN_TO_BE_REPLACED

A poem, by Ashk Ruhani

… long ago
in the timeless now,
we traveled, when
came a shaman
giggling in the glee of bringing us chest-to-chest,
his eyes mirroring our
lustful wonder of nipple-kisses
in burnished darkness, a dawn
flooding our mouths in feverish melding, and
the wind opening, ravishing us to
find our roots in olive groves between the pillars of our thighs, END_OF_DOCUMENT_TOKEN_TO_BE_REPLACED

We might take a quick look at who the Phoenicians were. A Semitic people of the land of Canaan (modern day Israel and Lebanon), they spoke a language related to Hebrew and Arabic, circumcised their boys, used the shekel for coin, and were merchants and sailors of great repute. They were also the ones who gave modern writing to the Greeks. Did they also teach the Greeks to love boys? Or was it the other way around? Or does it make just as much sense to ask this question as to ask which of the two taught the others to love women? END_OF_DOCUMENT_TOKEN_TO_BE_REPLACED

The names of Sultan Mahmud’s nine wives, dozens of concubines, and more than fifty children are largely lost to history. Not so the name of Ayaz, his slave and male lover. The love between the two is often given as an example of ‘ishq, or desire that is so intense that it overwhelms the ego. Thus it has long been a staple of writers praising selfless love. Of the many legendary love stories in India, theirs is alone in being between two males, and in having a happy ending. END_OF_DOCUMENT_TOKEN_TO_BE_REPLACED 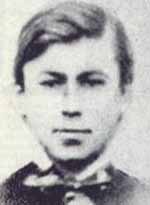 The whole world knows about the steamy gay love affair between Verlaine and the rambunctious seventeen year old genius, Rimbaud.  But Rimbaud was neither the first nor the last of Verlaine’s lovers. In 1878, at the age of 34, three years after his last meeting with Rimbaud, the poet fell in love with another seventeen year old. This time it was with a peasant boy from Coulomme in the Ardennes, a student at the College de Notre Dame at Rethel where Verlaine was teaching: END_OF_DOCUMENT_TOKEN_TO_BE_REPLACED

We all have a choice to make, in forging a life for ourselves as sexual beings. It is a choice both simple and complex, both conscious and unconscious. To put it simply, do we get with the program or do we live out our authentic nature?

At the most basic, primitive level, we have to make a choice of whether or not we will subscribe to the heterosexual fantasy. I call it a fantasy because I do not believe that there is such a thing as a heterosexual orientation. END_OF_DOCUMENT_TOKEN_TO_BE_REPLACED