We might take a quick look at who the Phoenicians were. A Semitic people of the land of Canaan (modern day Israel and Lebanon), they spoke a language related to Hebrew and Arabic, circumcised their boys, used the shekel for coin, and were merchants and sailors of great repute. They were also the ones who gave modern writing to the Greeks. Did they also teach the Greeks to love boys? Or was it the other way around? Or does it make just as much sense to ask this question as to ask which of the two taught the others to love women?

For just as surely as the Phoenicians loved women, they also loved young men. At least one of their gay love relationships has entered history. The elder of the two lovers is Hamilcar Barqa. The name is not as strange as it sounds. Barqa means “lightning,” the same as in “Barack Obama.” Ha is Phoenician for “brother”, Melqart means “king of the city” (melq “king” + qart, the same qart as in Qart Hadash, “New City,” which we know as “Carthage” in English, the Phoenician colony razed to the ground by the Romans – Carthago delenda est! Are we, the new Romans for we are certainly no heirs to the Greeks, still destroying Carthage when we persecute same-sex love?). We might add that Hamilcar Barqa is an important figure in history. A Carthaginian ruler, he founded the city of Barcelona (naming it after himself, of course) and was the father of the legendary Carthaginian general Hannibal, long the terror of the Roman empire (“Hannibal ad portas” became the Roman warning cry, “Hannibal is storming he gates”), thought by many to be one of the greatest tacticians of antiquity, on a par with that other lover of youths, Alexander the Great, who predated him by about a century. But we digress. 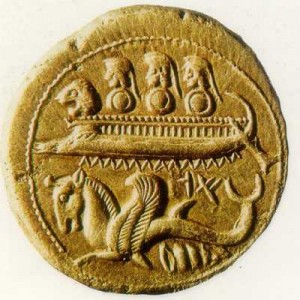 The younger of the two Phoenician lovers is Hasdrubal. Historians in antiquity identify him as the beloved. Significantly, it is also enshrined in his name, which has entered history as “Hasdrubal the Fair.” Obviously it is not for bravery, wisdom, cruelty, or greatness that he is remarkable. His is a story about the good looks of a youth, and their effect upon his life and the lives of the powerful men around him. His lover in time married him to one of his daughters and raised him to a position of power in the army. Indeed, upon Hamilcar’s death during a campaign in Iberia, Hasdrubal became regent and ruled in his place, as Hamilcar’s son, Hannibal, was only nineteen and too young to rule.

Hamilcar and Hasdrubal were reported to have been lovers by at least two ancient sources. Nepos, writing about two hundred years after the event, swayed by a Roman morality that looked askance at homosexual relations between social equals, and obviously admiring of Hamilcar, disparages the tale of the love between the two as “slander.”

There also accompanied him a young man named Hasdrubal, a person of high birth and great beauty, who, as some said, was beloved by Hamilcar with less regard to his character than was becoming; for so great a man could not fail to have slanderers. Hence it happened that Hasdrubal was forbidden by the censor of public morals to associate with him; but Hamilcar then gave him his daughter in marriage, because, according to their usages, a son-in-law could not be interdicted the society of his father-in-law. (Cornelius Nepos, Excellentium Imperatorum Vitae. XXII.III)

Nepos’ words point out the nature of that “slander:” The issue was not that Hamilcar loved the youth, which seems unproblematic, but that he treated him “with less regard than was becoming,” suggesting that Hamilcar had abused Hasdrubal by penetrating him sexually. In Roman times a man’s pudicitia or chastiy was all important, and being penetrated by another was an affront against that chastity that could mark one for a lifetime. Indeed, it was just that accusation that hounded Julius Caesar all his life, who at the age of nineteen while on an embassy had spent a little too much time at the palace of King Nicomedes of Bithynia. Caesar Gallia subegit, Nicomedes Caesarem, “Caesar all Gaul subdued, but Nicomedes did so to Caesar” ran the mocking ditty his soldiers chanted on the march home from the conquest of Gaul. Bibulus called him the “Queen of Bithynia,” and once when Caesar was pleading with the gathered senators for assistance for the Bythinians by reminding them of all the benefits Roma had received from their king, Cicero spoke up saying, “Enough of that if you please! We all know what he gave you, and what you gave him in return.”

Livy, however, writing a generation or so after Nepos, sticks the knife in and twists it, insinuating that first he played bottom to the man, and later played top to his lover’s daughter:

Hasdrubal, coming between father and son, held the supreme power for eight years. He is said to have become a favourite of Hamilcar’s owing to his personal beauty as a boy; afterwards he displayed talents of a very different order, and became his son-in-law. (Livy, History of Rome, Book 21.2)

So did they or didn’t they? Personally, I am persuaded that they were indeed lovers. One is not called “The Handsome” for nothing. We see a similar treatment in the naming of a later monarch, Radu the Handsome of Transylvania, who was the beloved of the Ottoman sultan Mehmed II. (Radu was the younger brother of the Romanian ruler who inspired the story of Dracula and who killed captured Turks by sitting them on a sharpened stake that slowly pierced their entrails – to avenge the sodomy that the sultan inflicted on his little brother, according to some.) In a world where euphemism has always been the mark of this particular kind of erotic discourse, such signifiers are not to be taken lightly.

So what does this tale have to do with us today? Other than the shared humanity, it throws an interesting light on that other, much more famous Semitic male love affair. Here too we have a king in love with a youth we are told is handsome. The young man sings and plays music for his royal patron and surely does whatever else entertainer youths have always done to really entertain their lovers. Did he dance for him too, as Afghan bachas still do today?

Just as Hasdrubal, this youth becomes a warrior in the king’s army and at some point is rewarded with the hand of the king’s daughter. This story however has an added twist. It is a masculine menage a trois, because the king’s daughter is not the only one who falls in love with the royal beloved. That same fate befalls also the king’s grown son. He falls in love with the youth and the youth rejoices in that love. The king, mad with jealousy, tries to murder his catamite. He fails, and in the end this story too closes with the beloved youth ascending to the throne of his former royal lover, just as the beautiful Hasdrubal followed Hamilcar. I am thinking of course of the story of Saul, David, and Jonathan. The guys in the Bible, you know?

This entry was posted in Homosexual biographies, Homosexuality and religion. Bookmark the permalink.
blog comments powered by Disqus