Thus the Bible, and surely it knows whereof it speaks. It has become cliché for those who write about the love of one male for another to unmask figures from the past. Surprisingly, the work is not finished, for there are those who would still veil what others reveal. The latest tactic in that losing campaign is to assert “But there is no proof!” But this is not a work that hinges on proof but rather on signs. And for those with eyes and with good will, the signs are legion, and are unmistakable. This will be a regular column, in which we will hold up to admiration (or contumely, as the case might be) those of our forefathers who loved wisely, and also those who loved a tad too well. 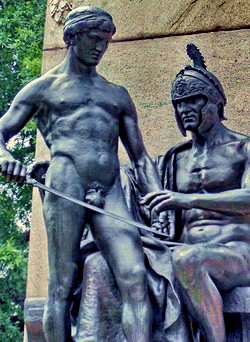 Let’s not forget the second part of the Biblical quote: “. . . and our fathers that begat us.” These men are our fathers, we should know them well.

I would like to begin this series with as international a pair of lovers as can be found, a couple of interest as much to the Europeans at to the Americans, a Prussian lover and a French beloved, both aristocrats. One, Baron von Steuben, was to become Inspector general and Major general of the Continental Army, as well as George Washington’s Chief of Staff; the other, Pierre-Étienne Du Ponceau, was to contribute to the study of Native American languages and for the last seventeen years of his life served as president of the American Philosophical Society.

Hounded by accusations of damnable relationships with youths, von Steuben, the 46-year-old chancellor to the ruler of the Prussian principality of Hohenzollern-Hechingen, had to abandon his high position, ignominiously flee the country, and seek employment wherever he could find it. A year later, in the summer of 1777, with his funds dwindling precipitously, his search for work took him to Paris. There he was introduced to Benjamin Franklin who was seeking experienced military officers for the war with the English. Perhaps aware of the baron’s questionable reputation but also conscious that he had been aide de camp to Frederick the Great, Franklin made him a desultory offer: no guaranteed position, no guaranteed pay, and no travel expenses for the ocean voyage to the Americas. The baron, insulted, turned Franklin down. Another possibility had opened up for him, a military commission in the service of the Margrave of Baden. However, the accusations that had driven the baron from his chancellorship preceded him to Baden. A letter was sent from the court of Baden to the court of Hechingen, inquiring about the charges, and about the intention of the clergy of Hechingen to “prosecute him by law as soon as he may establish himself anywhere.”

Perhaps realizing that his future in Europe was finished, von Steuben rushed back to Paris and accepted Franklin’s offer unconditionally. It could not have hurt that he had recently found a new boyfriend in Paris to whom he was strongly attracted. This was a certain Pierre-Étienne Du Ponceau, an exceptional linguist who had been living on his own, teaching Latin and doing freelance translation work since the age of fifteen. The youth, who had just turned seventeen around the time of their first meeting, became von Steuben’s interpreter and live-in personal secretary. The baron showed his appreciation for his new friend by presenting him with a precious sword, “silver hilted, damasked with gold,” which Du Ponceau promptly lost at an inn in Macon, on his way to Marseilles, where he and the baron were to board for the ocean crossing.

Du Ponceau lived with von Seuben for four years. He was appointed captain in the United Sates Army at the age of eighteen, at von Steuben’s request, and had occasion to meet Samuel Adams, John Hancock, General Lafayette and George Washington. Stricken with consumption and deemed incurable, Du Ponceau, then twenty one, left von Steuben and settled in Philadelphia. Foiling the doctors, he married, fathered three children, and lived another sixty three years. Von Steuben, however, never married. He retired from his posts at the end of the war, and for all his troubles and accomplishments was awarded by Congress only one twentieth of the sum which he had expected.  That may well be because he continued to fall in love with handsome young men, two of whom were to inherit his possessions upon his death in 1794.